Mario Games on the Nintendo 3DS 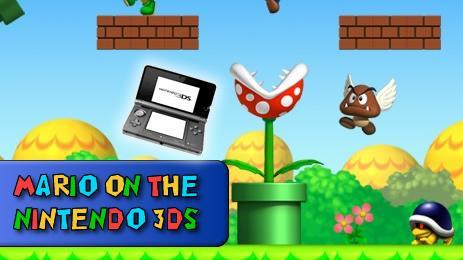 Mario Games on the Nintendo 3DS

Below are the Mario games on the Nintendo 3DS that we cover at the site. Visit a games page by clicking its box image below.

About the Nintendo 3DS Console

The Nintendo 3DS is a handheld game system that is noteworthy for its ability to produce 3D graphics without the need of 3D glasses. The system was first announced in 2010, where it stole the show at the E3 event. Other noteworthy features are the fact that it is has the ability to be backward compatible with the older DS models, saving the customer the hassle of buying a new set of video games.

One of the most celebrated features that were announced on the system is the virtual console that allows the user to download a variety of retro games or others that were not produced on the DS line of games. This is particularly true of the Mario games on the Nintendo 3DS, which experienced an incredible resurgence in popularity as a result of the more widespread availability. In order to complement the games that were available for download or backwards compatibility, several Mario games were released for the Nintendo 3DS. Some of the favorites that have been released so far are “Luigi’s Mansion 2: Dark Moon” and “Super Mario 3D Land”, both of which have been successful.

Aside from the wonderful variety of Mario games on the Nintendo 3DS, there are many other interesting features that were included on the system. For example, the system comes with a mini social network, internet browser, and the ability to communicate with other players. This brought multiplayer aspects of handheld consoles to new heights, which went greatly underappreciated when the system was launched.

There were many factors that did not help the 3DS launch including the state of the world economy as well as the fact that the system was released within years of the last upgrade to the Nintendo DS line. However, the system managed to have mediocre sales while it garnered the collection of games that have made it one of the most powerful handheld consoles ever released.

There are currently a few Mario games on the Nintendo 3DS that are waiting to be released. One of the most anticipated games is the popular spin off “Super Smash Bros” 3DS. This promises some of the best graphics in the series and all of the madness

that made the previous games such an incredible success. This game, combined with the multiplayer capabilities offered by the 3DS system, could easily prove to be one of the most successful, popular, and best-rated titles on the system.