Sticker fest is the big bash that the town of Decalburg celebrates each year. The sticker comet pays a visit on this joyous day and it brings with it the power to grant wishes courtesy of the Divine Sticker Beings according to the legend. Undoubtedly, a party nobody should miss!

It seems Bowser learned about the memo. He shows up just in time to smash into the party and touch the Sticker Comet. This causes a big explosion, scattering the pieces of the comet and the Royal Stickers in the land. When the dust patch up, Bowser has able to grant himself some shiny new powers, and he proceeds to threatening everyone in sight!

Mario joining forces with Kersti, ambassador to the Royal Stickers, must track down the missing royalty and comet’s pieces, to be able to restore the comet and once again bring back the order to the land. And maybe he has to give Bowser another punch down along the way!

Paper Mario Sticker Star returns to a turn based combat system just like in the original Paper Mario and Paper Mario TTYD, unlike in Super Paper Mario. Enormous emphasis is made on the importance of stickers that are needed not only to gain battle commands but also to be able to solve puzzles, etc. Some objects in the world (Known as Things) come out in the form of stickers. These can also be used to attack or help you get round obstacles. This game also discards the experience of points system which makes stickers even more essential to achieve more powerful attacks.

Mario must find HP-Up Hearts instead of experience points, every sticker he finds increases his maximum HP by 5 points. As done in the first two titles in the PM series, stickers also act as badges.

A new feature has been introduced in this game, and this is the Battle Spinner slot machine which allows Mario to use multiple sticker attacks in a single turn of battle and gain coins, or can cause something different to happen well, depending on what appears on the slot.

The fact that the game is “paper” yet there is a lot more play than there was in its previous titles in the series such as condition elements being things like "tacked", "soggy” and "clipped", all these hardships are also suffered by real paper. Some of the enemies also show their paper-based traits--for example, Goombas sometimes becomes Cone Goombas, etc. Characters in this game are also aware that they refer to themselves as being yet they live in a Paper-based World.

A player will become stronger with the collection of more powerful stickers to use as attacks, and the gathering of HP Up hearts, but no experience point mechanic or level up in this title. 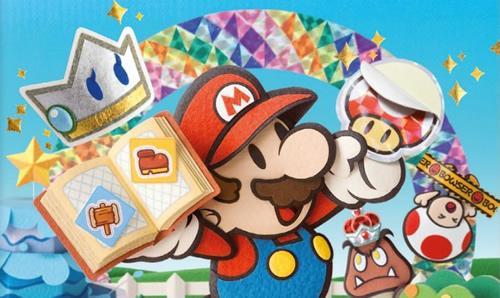 Mario with a book of stickers at Sticker Fest

How Paper Mario: Sticker Star differs from its predecessors

The official launch trailer for Paper Mario: Sticker Star on the Nintendo 3DS