New Super Mario Bros. U is a multiplayer Platforming adventure that provides a new take on a classic Nintendo franchise that will delight players of all ages and experience levels. A Wii U launch title, New Super Mario Bros. U offers a new way to experience Mario fun like never before. Game features include: support for up to five players, the new Boost Mode and Challenge Mode, unique uses for Miis, and new block elements that can be used as navigation aids.

New Ways to Play and Share Your Mario Fun
New Super Mario Bros. U is a new, side-scrolling adventure featuring Mario, Luigi, Toad ... and your Mii character. Now's your chance to step inside the Mushroom Kingdom and explore new worlds, new power-ups and new ways to play. Up to five players* can jump into the fun, with up to four people using Wii Remote controllers and one on the Wii U GamePad. The experience is different, depending on which controller is used.

Key Game Features
The Wii U GamePad controller offers a new way to experience multiplayer Mario fun. Create Boost Blocks out of thin air to help players navigate tricky stages or access hidden or hard-to-reach items, and distract onscreen enemies, all with the tap of their finger or stylus.

Swoop through levels and cling to walls when Mario transforms into Flying Squirrel Mario, or gently float through the air while hanging onto Balloon Baby Yoshi. 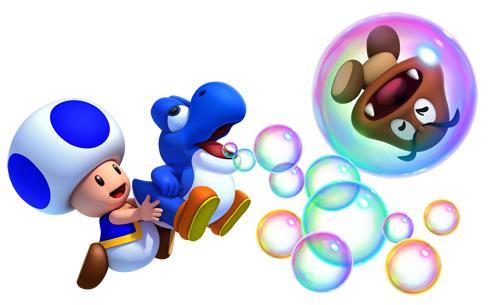 In addition to the main Story Mode, in which players must rescue Princess Peach, New Super Mario Bros. U features more exciting game modes, including: