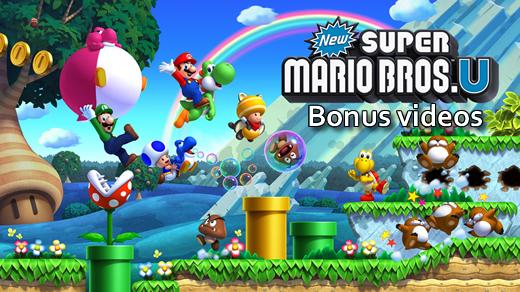 Welcome to superluigibros.com's New Super Mario Bros U bonus video sections, it should be immediately noted that the gameplay featured in these videos is a Club Nintendo member of staff doing the gameplay, not someone from superluigibros.com. Now thats cleared up, I would also like to clear up that this is an actual human being playing in these videos NOT a computer as has been suggested and discussed in some of my Google+ Super Mario circles. All I will comment is that I thought I was good at Mario platform games until I saw this.

So where these videos and why are you adding them now? As we know the UK and Europe got New Super Mario Bros U on November 30th 2012, a year later due to weak Nintendo Wii U sales they introduced a Mario & Luigi Premium pack for the Wi U in the UK and Europe (officially it came out 8th of November 2012 in Europe).

Included in this pack was of course the Wii U 32gb premium edition and a single disc which included both New Super Mario Bros U and New Super Luigi U plus bonus videos. The videos you are about to watch are those very videos.

A rough summary of what is included in this playlist is as below, I recorded them direct from the Wii U in 1080p HD too for your viewing pleasure.

If you want to skip a video simply click Playlist in the top left of the video menu and select whatever you'd like to skip to. If you like the videos you should consider Subscribing to our YouTube channel as regularly add new videos of everything Mario there.

Hope you enjoy the videos, prepare to be amazed by Mario madskillz.