Mario Sports mix is a sports game for the Nintendo Wii developed by Square Enix and published by Nintendo. It came out in Japan late in 2010 where it received fairly good ratings to the tone of 78% game scores. The game will be released globally by the end of February 2011. This is the third Mario title in which Square Enix have been involved in with the others being Super Mario RPG and Mario Hoops 3 on 3, surprising as Square and Nintendo seemed to have parted company indefinitely after Super Mario RPG back in the 90's.

This game is exactly what it says on the tin, a sports mix featuring volleyball, field and ice hockey, dodge ball and street basketball.

The gameplay in Mario Sports Mix provides gamers with a number of options - they can play alone, against friends, or cooperatively with friends. Up to three friends can use the cooperative mode, whereas up to four players can participate in competitive play. The gameplay will be effected by a wii remote and nunchuck - players will interact with the game in a similar way to that of Wii sports; jumping, swinging etc - we're sure it'll make you live longer! here is a little more info about the gameplay specifics from each game:-

Very similar to the gameplay in Mario Hoops 3 on 3, the more coins a player gains whilst in play the more their score will increase. When in this game there is a display in the bottom left of the screen with a 24 second time limit just like the professionals would have. 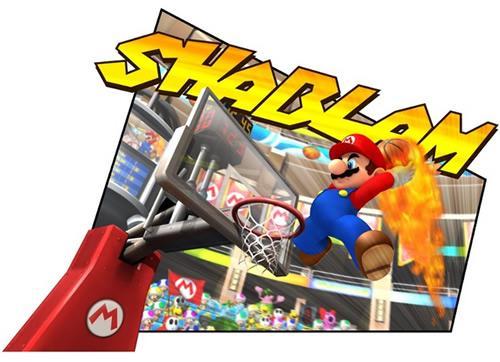 The volleyball arenas will feature question panels on the floor giving items to players that step on them. The same coins / score system as mentioned in basketball will also still apply.

During the ice hockey you will again notice question blocks which give players items or coins to increase their score you might also notice that the puck itself is actually a coin.

Teams of 2 or 3 plus either a red or blue Yoshi to help them out will battle it out launching balls, and whatever else they can get their hands on at the players on the other team until they're out. Players have a health bar and when they are hit their health will go down - when a players health has gone all the way down they'll move with your teams Yoshi to a box, and can only leave once they have hit someone - they'll then get a small amount of their health bar restored and be able to move again.

Mario Sports Mix includes 19 playable characters each with their own unique abilities and broken down into 5 groups for example some are faster, some more powerful, some good allround, some may have better technique and some simply have some nice tricks up their sleeves. We've done a table showing which characters belong to which skill group below.

You'll also see obligatory appearances of popular items from the Mario universe throughout the games which are available when players touch the question mark panels these include but are not limited to Green and Red shells, Banana Peel, Mini mushroom, super star, bob-omb and gold coins.

In the run up to release the official website for Mario Sports Mix had games and puzzles on it and when you completed them successfully you could unlock the ability to download high quality posters and pennants, we've got them all here for you to check out:-