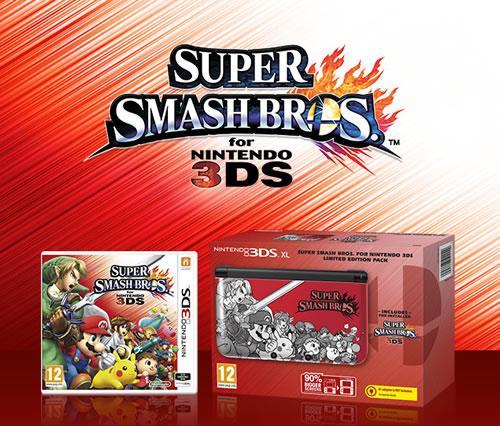 Big N have just announced a pretty sweet looking limited edition Super Smash Bros 3DS XL bundle, this one is only for Europe, but hopefully something will follow for the rest of the world.

NOA always seem to keep their cards close and upstage everyone at the last minute, so I will be keeping an eye out for any news from them and other global releases and will post up here - any tip offs for your locale appreciated!

European Smash Bros. fans are set for a treat when the Super Smash Bros. for Nintendo 3DS Limited Edition Pack

on 3rd October. This package gives fans the chance to own a red Nintendo 3DS XL* system with a striking Super Smash Bros. motif emblazoned on the front, available whilst stocks last. This limited edition hardware comes with a pre-installed digital copy of Super Smash Bros. for Nintendo 3DS, so players can get straight into battle, right out of the box.

To celebrate the legacy of many popular fighters on the Super Smash Bros. roster, Nintendo also announces today that over the span of two weeks in August there will be Nintendo eShop discounts of up to 50% on more than 25 downloadable retail and Virtual Console titles on Nintendo 3DS and 2DS as well as Wii U.

Whats the one problem with so many limited edition themed Nintendo 3DS XL's? well, you only really need one 3DS XL - so with a Yoshi edition, Luigi edition, Zelda edition and now a Super Smash Bros edition what are we to do? Personally, I'm in turmoil. And with that aside here is a reminder of what we've got to luck forward to in the upcoming SSB titles.