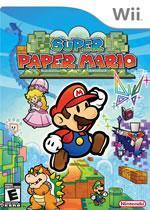 "Paper-thin but thick with fun."

What was once scheduled to be a Gamecube game during its development time is now what I consider to be the second killer app for the Wii, Super Paper Mario. Just because the game started in development on the Wii's predecessor does not make this game a Cube port as you'll discover through playing in this platformer with RPG elements.

Super Paper Mario begins with the unlikeliest of scenarios-- Princess Peach and Bowser's wedding. Arranged by the crafty antagonist, Count Bleck, this union is said to cause worlds to be destroyed as foretold by the Dark Prognosticus, a book of undisclosed power. Without revealing too much, an unlikely hero comes to break up the marriage in the opening scene. Regardless, Mario treks off into a side-scrolling journey reminiscent of the old NES games.

You hold the Wii remote sideways. The 2 button functions as your jump button, and the 1 button calls upon the help of your secondary Pixl. Pixls are fairy-like beings each granting Mario and company a power such as ground pounding, turning small, throwing enemies, dropping explosive bombs, and more. Finally, the coolest feature is accomplished by pressing the A button to shift the world from 2-D to 3-D. Can't get past a tall pipe? Flip the world to 3-D so you can walk around it easily. The largest enemy in 2-D can be unveiled to be paper-thin in 3-D. As you can guess this tactic of flipping dimensions is used a lot for puzzle-solving, progressing in the game, and obtaining hidden items. Pixls are also used to help out via bombing switches, ground pounding pillars, throwing a stone into a switch, and so on. Additionally to the Pixls to assist you, new characters will as well including the hovering parasol-packing Princess Peach and her "husband", the King of the Koopas, Bowser.

The game's flow is by chapter. There are usually four sub-chapters (1-1, 1-2, 1-3, 1-4) in each chapter culminating in a final boss battle for one of the legendary Pure Hearts. These aforementioned hearts are said to open new worlds as said by the Light Prognosticus, the hero's book of yore. The first chapter boss for instance, can only be defeated by flipping into 3-D, catching a ride on its back, and tossing enemies into its antennae. Each sub-chapter has Mario and friends going from various locales hopping, bopping, collecting coins, battling mini-bosses, and doing all of Mario's patented gameplay of 2-D faith ultimately towards heading to the goal block ending a sub-chapter.

I called this game a platformer with RPG elements because you'll be doing RPG-like actions such as managing your inventory, gaining experience, leveling up to increase hit points and your attack strength, wading through lots of text (some humorous and insightful and others just boring and pointless). You can collect cards of enemies to do double or triple damage to the enemy whose card you have acquired. These cards can be purchased in the hub town, found in various hidden areas in the sub-chapters, or taken directly from enemies using catch cards-- Pokeball-esque capture devices.

I very much prefer playing a platformer in the vein of an RPG instead of an RPG in the vein of a platformer as the previous Paper Mario games have been. The gameplay is refreshing and fun, there's sidequests to be had, various locales to (re)visit, and a vast majority of baddies to defeat. Few sub-chapters were tedious which involved the player to back-track, write down a bunch of numbers or directions for an asinine code, type the word "please" five different times to advance, and long text-driven sessions. The soundtrack is as generic and uninspired as Paper Mario: The Thousand-Year Door. There were few tunes I could hum too or enjoyed the melodies of (most of the music doesn't even have an identifiable melody).

Anyone though looking for a great platformer with very cool and clever 2-D to 3-D gameplay should definitely check out Super Paper Mario. It's what I consider to be the second killer app for the Wii, and the first killer app if you want something exclusive to the Wii. 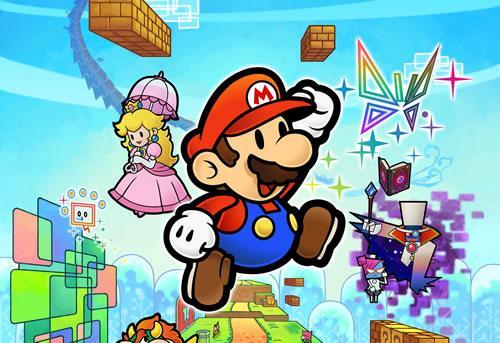 Story: Guided by the Dark Prognosticus, Count Bleck wants to cause trouble by destroying various worlds. Mario and company to the rescue.

Graphics: Bright, colorful, and crisp. Sprites are excellent. 3-D worlds are a little bland though.

Gameplay: What you would expect from a Mario platformer. Simply brilliant.

Sound: The sound effects and occasional voices are nice. However, the music is quite generic and not easy to love.

Replay Value: From collecting all the cards to beating the Pit of 100 Trials, to finding all of the recipes and Pixls, there's a lot to do in this game.