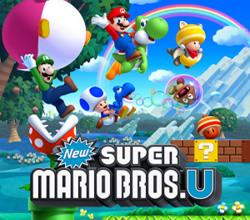 "If Only NSMBU Were as “New” as It Touts To Be"

NSMBU sticks to the same exact gameplay as its predecessors. There is absolutely nothing different, barring little twists and themes thrown into each of the levels. You play as Mario, defeat enemies as you make your way towards the end of the level, and topple the Bowser flag to end the level. Rinse and repeat. And repeat. And repeat. However, this repetition is warranted and justified through the fresh level designs and polished nature of each of the stages. While some of them are utterly forgettable, others are engaging, fun, adrenaline-pumping, heart-pounding, blood-coursing stages of sheer, uh adrenaline! These emotions are only amplified and magnified as more players are added to the mix. For example, Soda Jungle's Castle is a stage with constant waves of lava coming at you; the waves are, for the most part, static with crests and valleys. However, as they trek westward, the obstacles above the lava get submerged and washed ashore over and over again. 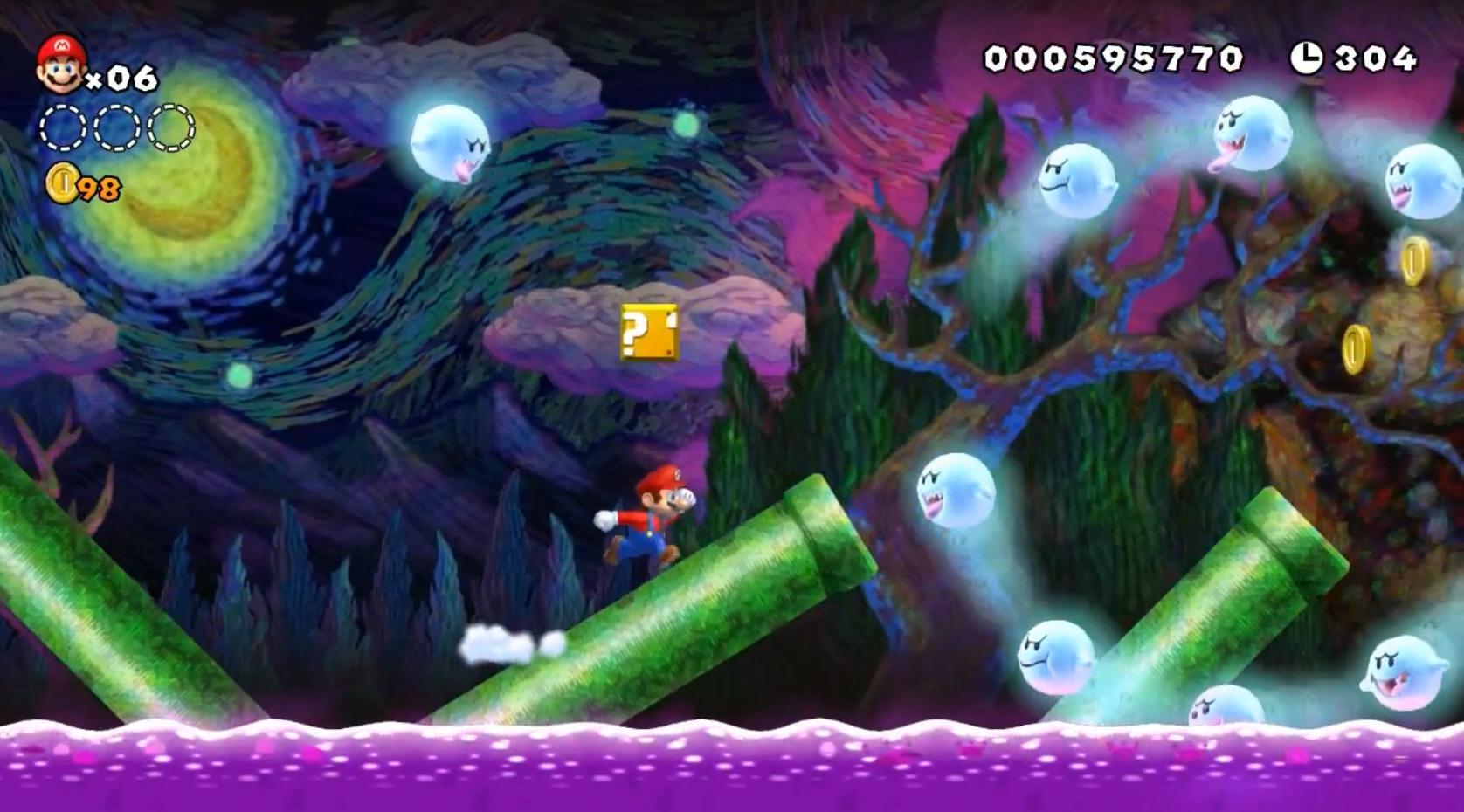 While that's wonderful and all, there is one serious error with that sort of setup: Nintendo has already done that before. For those of you who have played New Super Mario Bros. Wii, remember World 8-3? It did the exact same thing. Lava waves and all. What's the point of buying NSMBU if I can just go back to its predecessor on the Wii and play the same level? Granted, there are plenty of levels that are different and unique; nevertheless, the same concerns remain. With each level, there's always the feeling that I've done this before. No, not because I just died on that level. Rather, because I played Soda Jungle's Castle in its Wii incarnation. Rather, because I played 5-4 in New Super Mario Bros. Wii, I'm prepared for Peach's Castle's rising elevator. It's nothing new. There's absolutely nothing new about it. I've played it. You've likely played it. We've all seen it before. It's not new.

Even the smaller parts of each level are similar. The little tricks and techniques are practically guessable by now. I've only discovered one truly new trick throughout my entire time playing NSMBU, and that was in Rock-Candy Mines first level: to get one of the star coins, I needed to have Yoshi eat an ice-ball, and spit it at some Piranha Plants that would then freeze and fall on the Piranha Plants below, allowing me to reach the star coin. Of course, this may just be new to me; I'm not an avid Mario Bros. player, so these stages may be even staler to more experienced gamers. Anyways, many of the intricacies in each of the stages are far too familiar for their own good. If I know what to expect, what to do when playing a level for the first time, I can't imagine how more experienced gamers feel.

Knowing what to do usually wouldn't bother me, but, for NSMBU, it's worrisome. This is a game that prides itself on making you problem-solve, on making you think, on making you figure conundrums out. It's not supposed to be taking you to the intellectual doldrums. Ninety-five percent of star coins--basically larger coins that unlock extra levels post-game--can be easily obtained with some basic searching. Furthermore, a good fifty percent of all star coins can be found with a basic, non-comprehensive playthrough. What's the fun in that? I don't want to play NSMBU and breeze through each level. I want to die. I want to scratch my head. I want to have to pull off near-impossible feats. Because then I can feel as if I accomplished something--NSMBU feels like a warm-up before the actual challenge. 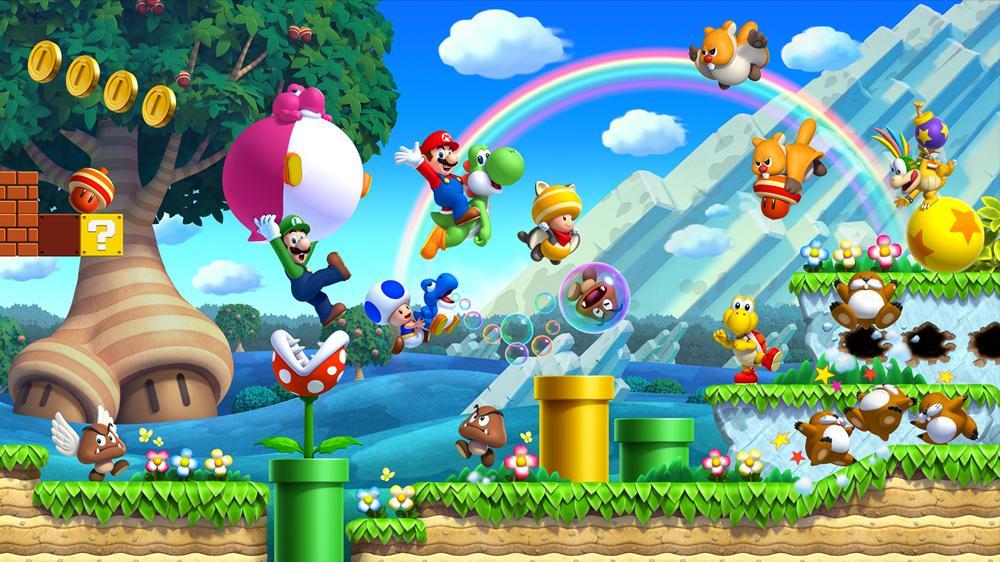 Single-player gameplay is solid; it adds a few degrees of difficulty and forces you to work hard for your star coins and level clears. On top of that, using the GamePad gives you a nice, closer view of the stage. However, the aforementioned increased difficulty for a single-player is offset by a common multiplayer Mario Bros. problem—the stages are not meant for multiplayer. One part of a stage may require all four players to sit on a block one square wide for a short period of time; how can you do that with four players? You would need to have two players on the bottom and two players bouncing on top of them. That's frankly and utterly stupid. Whereas a single player would simply breeze right past that part, multiple players are going to have to finagle their way through there. The alternative is to simply “bubble” multiple players as a one or two of the players works their way through that particular precarious part. But, again I ask, what's the fun in that? Forcing other players to sit out while one player does the “hard work”—preposterous!

The stages were not designed for multiple players. They were not designed for one player either. The developers of NSMBU try so hard to strike a delicate balance between being multiplayer-friendly and single-player possible. For the most part, they manage to do this well. But there are also many parts like the scenario I mentioned above: the multiple player setup simply does not work. Furthermore, if any one player is far less skilled than the others, he or she can end up dragging the whole group behind or end up getting left behind. On the opposite extreme, if one player is far more skilled than the others, he or she can end up leaving the rest of the group in the dust in their attempt to proceed. While this is mostly a group dynamic that should not detract from the game for most people, it's a consideration you have to make before you sit down and play with multiple people. 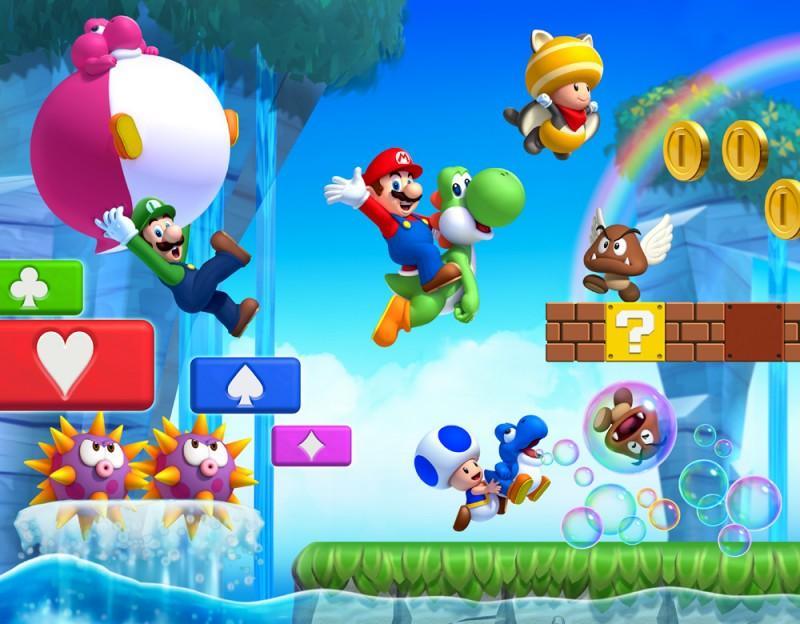 When you play with multiple players, Boost Mode becomes available. Basically, you can--you can always switch this off--opt to have one player use the GamePad to “assist” the other players who are actually moving through the level. The player with the Gamepad gets an overall view of the stage, and can “assist” the other players by placing temporary blocks to help them reach other areas, by stunning or immobilizing enemies, by revealing hidden areas and power-ups, and by saving players when in peril. However, you may notice how I've been putting “assist” in quotation marks. Well, that's because Boost Mode isn't always giving a boost; even with the most experienced “boosters,” one can hurt more than they help. The blocks they place are like regular blocks in most cases: they can block pitfalls, help you reach new areas, but they can also obstruct your path. They can place blocks where you least need or want them. Sure, they can help you reach places you want to go, but they can also help you reach places you don't want to go--e.g., the lava below. An inexperienced player on Boost Mode can basically cripple the game. Boost Mode has its uses, but it also has some serious flaws.

The Glowing Baby Yoshis aren't the only bright aspects of NSMBU. Firstly, I do need to address the graphics and sounds of NSMBU; they are as crisp as ever. While the graphics certainly are not as impressive as they could've been, they work. They follow the game to a “T.” There are no problems; rather, there is just a bit of disappointment the game didn't try to do something more. Regardless, the graphics are as clear and fresh as ever, especially on the World Map. The music is also top-notch in most aspects; however, it's nothing you'd want to go out there and buy/download for your future listening pleasure.

The graphics and sound are reflective of the overall game itself. NSMBU is Polished with a capital “P.” There are no glitches, no problems, no bugs, no coding errors, no “bad” levels, and no specks of dirt to be found everywhere. It's spotless. Speckless. Splochless. After releasing the same game over and over again, Nintendo has finally made an utterly punctual game with no major mistakes whatsoever. I cannot speak ill of the quality of this game; while it may have its core problems, the presentation is perfect. 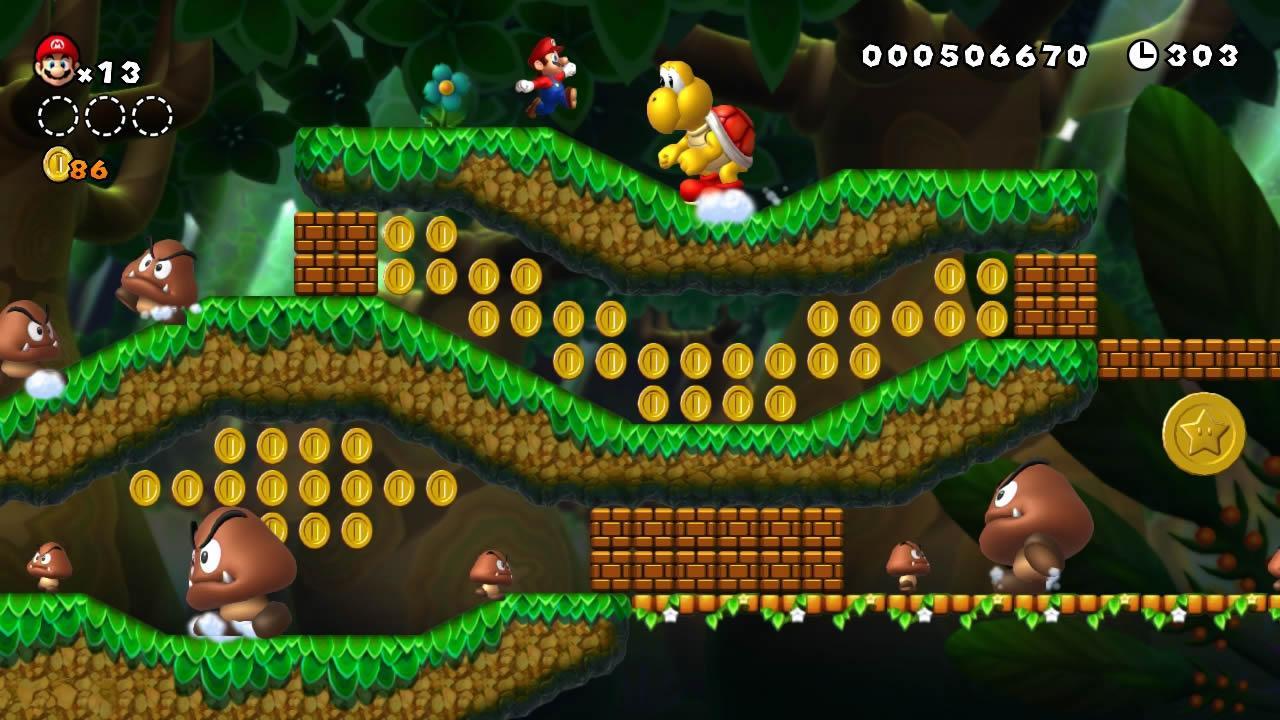 Obviously Nintendo has done something right. Hell, there are fourteen games in this series. You don't become prolific like that overnight. However, with eight nearly identical platformers, there's little innovation to be attained. That needs to change. While there is nothing wrong with NSMBU on the surface, it has major problems with its staleness. It is far too similar to its predecessors. No, I'm not asking for New Super Mario Bros. to redefine itself. Is NSMBU a bad game? Certainly not. But is it a game that needs to get a freaking grip and realize that there are three games before it that do the exact same thing? Yes! The Mario Bros. series needs to realize that either (a) it needs to wow us consumers with some truly considerable expansion and level innovation, or (b) it needs to overhaul its multiplayer system and basic platforming premise. To be brutally honest, nothing sets NSMBU apart from its predecessors, so, if you have those predecessors, you need to think long and hard before you get this game. If you haven't picked up a Mario Bros. game for ten years, this is a great game to start with. Regardless, the game is still hindered by its super-polished status--no innovation whatsoever. If only New Super Mario Bros. U were as “new” as it touts itself to be.

Replayability
+ Lots of play time to begin with
+ Challenges and other extras add more replayability
- Very similar to other games; drowned out in similarity