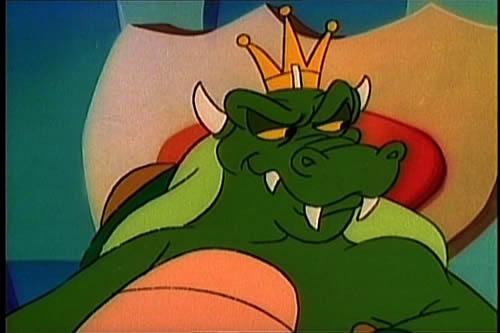 For this weeks retro feature at Super Luigi Bros we've compiled a collection of quotes from the most wretched reptile of them all, King Koopa. These ten quotes best show the personality of the loveable rogue that was the Super Mario Bros. Super Shows antagonist. King Koopa is voiced by Harvey Atkin in these quotes.

1. "Like my grandfather Poopa La Koopa always said, Cheat, Beat and be merry!" - Butch Mario and the Luigi Kid
2. "You call that music? Stop that racket! I hate that music! I hate spaghetti! I hate quirks! I hate those faucet freaks!" - Stars in Their Eyes
3. "The courage beyond compare, the bravery beyond description, I praise this great hero, the superior fiend... me. Koopa Khan the magnificent. If I didn't deserve this, I wouldn't give it to me." - Brooklyn Bound
4. "Those annoying wrench-heads won't ruin my evil plan! Prepare an ambush, Mouser! make road pizzas out of them!" - Toad Warriors
5. "These fireballs are fantastic! Think of the destruction; think of the wreckage; think of how much this'll lower my heating bill" - The Fire of Hercufleas
6. "Say Ciao to your friends, Princess Toadstool. Thats goodbye in Italian, because when you see 'em again, you'll be a tomato sauce sucking vampire, just like me!" - Count Koopula
7. "Listen up, you reptile retches! its time to play 'Auction the Princess' Do I hear one thousand gold coins? Remember, the money goes to my favourite charity... me." - Pirates of Koopa
8. "Boogie with Koopa, you fungus brats! Boogie right into my double-deaing clutches!" - The Pied Koopa
9. "Koopa Court is now in session! Bailiff Mouser, read those phony charges you and I cooked up!" - Espace from Koopatraz
10. "Gosh, this tyrant business is hard work! I'm too pooped to Koopa! Think I'll take a Koopa catnap" - The Ten Koopmandments

Although DiC got a lot wrong in terms of the transfer of characters personalities, traits and abilities from the gaming series to the cartoons many people are actually very fond of the character that they made King Koopa into he certainly has a lot more personality than his alter ego "Bowser" from the games; although Bowser is certainly the more ferocious of the two, King Koopa can't even spit fireballs!

There were over 50 episodes of the Super Mario Bros Super Show, and of course we couldn't put all of the quotes in our top 10, what other great quotes that we haven't included in our video can you remember from KK?