Super Mario Games on the Nintendo Wii U
Login

Super Mario Games on the Nintendo Wii U 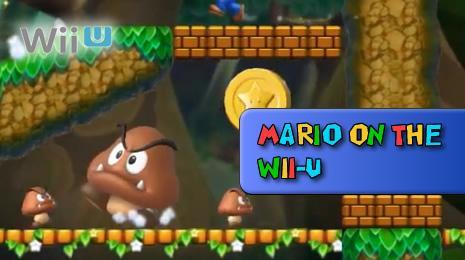 Super Mario Games on the Wii U

Below are the Mario games on the Nintendo Wii U that we cover at SuperLuigiBros.com. Visit a games page by clicking its box image below.

About the Wii U

The Nintendo Wii U is the latest video game console to be released by the Nintendo Company. It is Nintendo’s flagship into the eighth generation consoles and has been met, so far, with a fair amount of positivity. Right now, its biggest competition are systems such as the Xbox One and Playstation 4 which have better graphics, but lack the deeply-embedded Nintendo game franchises.

The Wii U went in a completely different direction than its predecessor in terms of graphics and controllers. This is the first Nintendo system that can boast high definition graphics, making every game look sharper and better defined. Nintendo’s obsession with providing oddly-functional controllers has continued as well, with a controller that has a touch screen that interacts with most games. The Wii board and nunchucks have also made a return for the Wii U. Like its predecessors, the Wii U is completely backwards compatible and features online capabilities. Yet, all of these features did not help the Wii U get off to a fast start. With a lack of exciting titles at the launch and stiff competition from Microsoft and Playstation, the Wii U faced problems so dismal that some stores would not even stock the system or games.

However, the one thing that has set the Wii U apart from all competition is their ability to play catch up. They have released several of their best-selling titles in the last year, and show signs of a resurgence. In particular, the Mario games on the Nintendo Wii U have made the system viable. “Mario Kart 8” was recently released to the joy of millions; quickly becoming one of the system’s best selling games. Another one of the Mario games on the Nintendo Wii U that contributed to saving the system is Super Mario 3D World, which has combined old school elements of the series with the beautiful high definition graphics that the system offers; it was described by some as "the most next gen game of 2013" despite how badly the Wii U was doing as a console.

While these Mario games on the Nintendo Wii U are helping to bring the system back into the fold of major console developers, there are many other exciting titles coming to the system. “The Legend of Zelda: Windwalker HD” has been widely accepted as one of the best ports ever completed by Nintendo. With more games such as this coming

to the system, there has been a great deal of talk surrounding the Nintendo Wii U, hoping that it will overcome the flaws that have driven it towards the edge of defeat in the ongoing console wars.