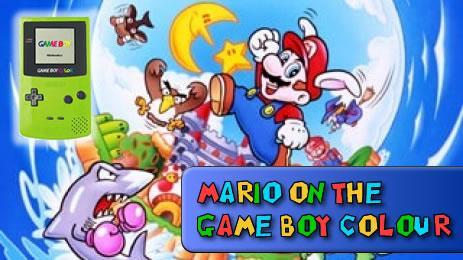 Below are the Mario games on the Gameboy Colour that we cover. Visit a games page by clicking its box image below.

About the Game Boy Colour

The Game Boy Colour, also known simply as the GBC in the gaming community, was released in October 1998 in Japan and then internationally in November of the same year. It was put into production after a great deal of pressure resulting from the less than satisfactory sales of the Game Boy Pocket, which lacked the desired playability. It was conceived with the idea of backwards compatibility and a larger base of titles led by Mario games on the Game Boy Colour. Of course the greatest achievement of this system is the simple fact that it was able to integrate colors into the games, giving all Game Boy Colour titles a new depth.

The addition of colour was not the only change made with the new Game Boy. It features a slightly taller and thicker build than the Game Boy Pocket, which solved the only true complaints about the Game Boy Pocket System aside from the ever-present 8-bit graphics system. The other systems that were released as competition were the Neo Geo Pocket and Wonderswan, neither of which experienced the success of the Game Boy Colour. The Game Boy Colour and the original Game Boy combined for sales upwards of 118 million units, almost ten times the sales of other hand-held systems.

As part of their attempt to hold their rediscovered handheld success, Nintendo released several Mario games on the Game Boy Colour. Some of the most prominent titles were “Super Mario Bros. Deluxe” and “Mario Golf”. While these were some of the original games, the true success came from the fact that Mario games on the Game Boy Colour were able to count earlier titles in their game library due to

backward compatibility with the early games.

The Game boy Colour was one of the dominant systems in the market for five years when it was discontinued after the introduction of the Game Boy Advance. The integration of color and the concept of backwards compatibility have cemented this system’s name in video game history.