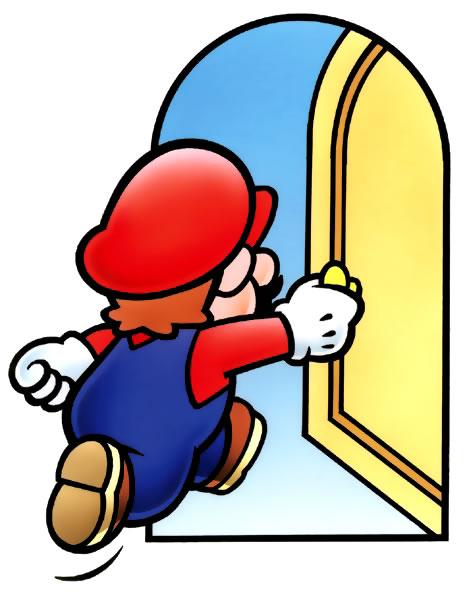 Enter Yume Kojo, Doki Doki Panic, one of the best Mario games that had nothing to do with Mario. Super Mario Advance reminds us of the great game that Super Mario Bros. 2 was, and how it allowed us to do things that before that were crazy, playing with the princess? Sure, you got it, toad? Yup, dash through levels and throw those turnips… turnips? Like crazy.

Jump on those enemies and do nothing, to them, time clocks, cherries, stars, mushrooms on hidden zones, all in the magical world of Sub-Con. Join Mario and company on the best dream ever made into a game, now on your Gameboy Advance.

In case it wasn’t enough, this Mario Advance includes the original Mario Bros. on it, with the link cable you can duke it cut against your friends in a good old stomping match!

Mario had a strange dream, one evening. In his dream, there is a long, long stairway leading up to a door. He was confronted, as soon as the door opened, with a never before seen world that is spreading out as far as his eyes could see. A faint voice was heard by Mario when he strained his ears to listen, it says "Welcome to 'Subcon', the land of dreams. The Wart has cursed us and we are completely under his evil spell. Your arrival is so much expected. We ask you to please defeat Wart and return to its natural state our beloved Subcon. There is no any effect in here if the Wart had put a curse upon you in the real world, and don’t forget, vegetables are the most hateful thing for Warts. 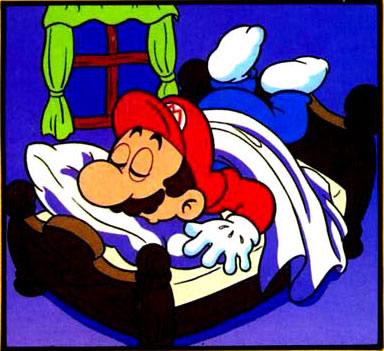 “Please do help us!" At the same time Mario heard and saw a bolt of lightning flashed just before his eyes. Mario was stunned and lost his footing and even tumbled upside down. He waked up only to find himself sitting up in his bed. Mario, to clear his head about the dream, talked to Luigi, Toad and Princess about this strange dream. Then, they all decided to go to a nearby mountain for a picnic.

A small cave nearby had caught the curiosity and attention of our heroes after they arrive at the picnic area and while enjoying the scenery. To their great surprise, upon entering the cave, When they entered the cave, to their great surprise, there's a stairway leading up, up and up. It is exactly like the one Mario saw in his dream. They all walked together up the stairs and at the top, found a door just like the one in Mario's dream. When Mario and his friends, in fear, opened the door, to their much more surprise, the world that he saw in his dream spreads out before them!

Super Mario World: Super Mario Advance 2 boasts all 96 levels from the original Super NES game, from cheery Yoshi's Island through the sprawling Vanilla Dome to the gruelling Star Road. While some levels emphasise pure action, others require you to puzzle your way out of the mazes and illusions. If you find the hidden key in Star World, you'll gain access to the extremely challenging Special World, which has its own hidden secrets.

Mario and Luigi can jump up and down pipes, climb vines, swim, and toss Koopa shells. Yoshi the dinosaur can spit eggs, munch, and climb with his ever-helpful tongue. Cool touches include spinning platforms, forced-scrolling levels, and great attacks such as the spin jump. Mario and Yoshi fly with the aid of a unique feather, shoot fireballs when equipped with a special flower, and can even raise cute baby Yoshis. Each boss poses a unique challenge. Cross-eyed Lemmy Koopa likes to play hide-and-seek in pipes, while Iggy Koopa prefers to battle on a giant Koopa shell floating on a lava lake.

The awesome gameplay of Super Mario USA/2 remains, move with the pad, jump with A, do everything else with B, what is everything else? Well, hold B to run, step on something and pull it out with B, throw it with B.
The elements of the last game are included, such as Grabbing things from the Air and throwing them out with B, digging out sand with B, and finding mushrooms on hidden zones.

Alongside the cherries that give you a StarMan and the big vegetables that give you a time stopper, you will find a huge amount of hearts through your journey, and red coins that will open up bonuses and will help the completion of the game.

The Super Mario Bros. game is controlled just like the Arcade game, level progression is awesome and the graphics are on point.
Once you beat the game you may enter into “Yoshis’ challenge” where you visit Sub-Con again to gather 2 Yoshis hidden per level! 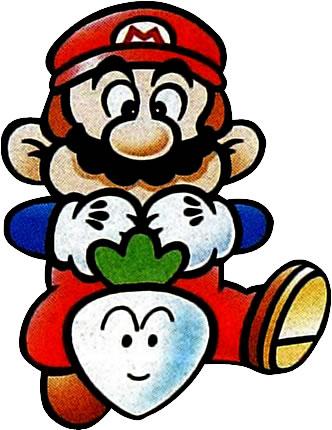 Mario pulling up a Veggie

Our Gameplay video by Benni Castellanos

With an 84% on metacritic, and amazing scores from GameSpot and IGN, the game had wonderful reception, IGN actually called it “one of the most polished and creative platformers of the era.”.

Super Luigi Bros user review scores:-
- Flying Omelette weighed in with a fairly brutal 4.5 out of 10
- It's a 6 out of 10 from Chandlerbing
- Super Mario All-Stars 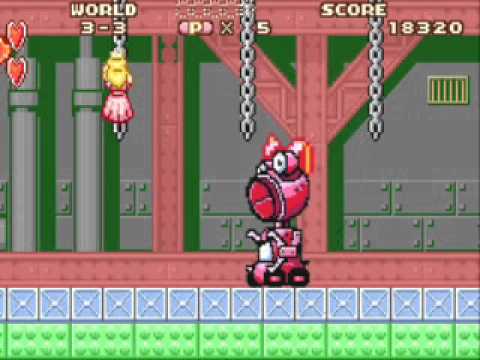 Robirdo, the new boss of World 3