Hello everyone! I am sure you all are wondering the same thing about this game.

''Is this the first Mario game?'' There are many, many different answers too that, but later on I will state 2. For now, let's review the game that made Nintendo's mascot be it's mascot!

Gameplay: 10/10
Nicely done! They make it so easy and yet so........easy! They give you a jump and a run/shoot fireball button, mushrooms, fireflowers, a super-jumping pair, a lot of Koopas and Goombas, a giant Koopa, lots of toads, and a princess and it turns into this addictive and fun game! It is so simple yet so new, that when this game came out, people never could put it down! If wondering, the mushrooms turn you into Super Mario, and Fireflowers into Fireball throwing Mario. When Nintendo made this, they weren't only paying attention to graphics, they payed attention to this awesome game!

Graphics: 10/10
That is, considering the date this was made, as well. This game was made in 1985, when 8-bit graphics were unthinkably good! One of the things I am proud of is the way these things actually shine! Not just a brighter color, but a SHINE! Many games for the Playstation didn't do a pure shine! Some other good things about this game's graphics were it's detail. Pay attention, and you see some nice detail! They make Mario's mustache curve nicely. They make Luigi look...um...Luigi-like! 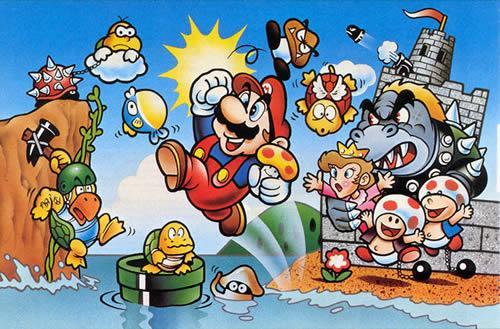 Sound: 8/10
Probably the worst thing about the game, and this is pretty good! The sound is so clean and crisp without a crinkle or a sshhhh like sound! It is so cool, yet so in touch with what is happening! No sounds where they shouldn't be! Great sounds where they should be! They make it so you would want to buy a soundtrack carrying sounds! The reason I gave it a 8 is, that after a few times of beating it, the sounds get a little annoying.

Music:10/10
Nice music! It is always where it should be, not missing a beat! It always goes with what your thinking at the time! and each environment even gets its own music type! The plains have a classic music too it that is still used today(anyone remember Super Mario 64s theme music? Know where it came from?) The underwater levels have a.. I can't explain type music. The tunnels have music that is used today as well! The dungeons have a nice, creepy style music!

Rent/Buy/Borrow
If you can find it, buy it! If you can't, then use EBay or search google. Someone must be selling a copy, right