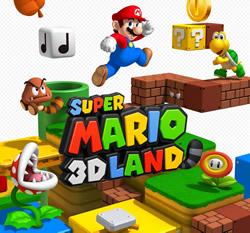 "A near-perfect mix of 2D and 3D Mario magic"

To say that the Nintendo 3DS has gotten off to a rocky start would be an understatement. With struggling sales and an empty library, there hasn't been too many reasons to pick up Nintendo's latest handheld. But with the price drop over the summer and new titles such as the subject of this review, Super Mario 3D Land, could we finally have a title that is worth getting a 3DS for that isn't a port or remake? Let all worries be put to rest as the answer is a resounding "yes."

By now Mario game stories shouldn't surprise anyone. Bowser, in his infinite ability to somehow capture and kidnap poor Princess Peach, has done the deed once again, leaving behind a postcard bragging about his misdeed to our mustachioed hero and a brigade of Toads. It is up to Mario to run and jump his way through eight worlds of increasingly challenging platforming perils. Unlike past Mario titles there aren't any themed worlds. There is no grassy world, jungle world, desert world, ice world, underwater world, etc. Instead what players have are levels that are themed and run the gamut from beaches to pyramids to plains to areas with blocks suspended over bottomless pits to frosty fjords to haunted houses, a mainstay of Mario games since Super Mario World. Every world ends with either an airship or castle level. Each world's ending airship or castle concludes with a boss battle. There are not many bosses to contend with. Players either avoid the attacks of Bowser while they perform platforming challenges and retract the bridge the koopa king stands on (done with a stomp of a button) or face off in a room with Boom Boom (returning from Super Mario Bros. 3) or his female counterpart who throws boomerangs, Pom Pom. 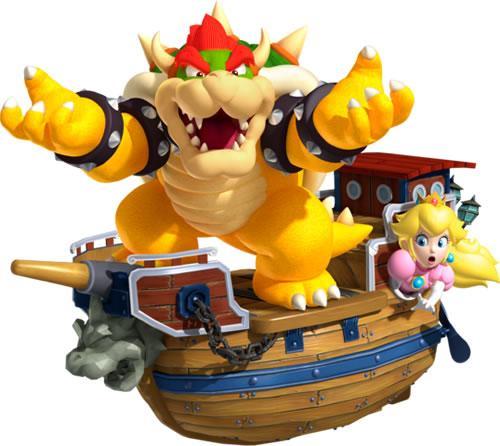 Super Mario 3D Land very much feels like a natural progression between Super Mario 64 and Super Mario Bros. 3. The latter mostly because the worlds of 3D Land are teeming with Tanooki tails. Not only can Mario nab one, twirl his tail to attack enemies as well as flutter across gaps-- the Tanooki suit is tantamount to a safety net as there is a wider margin for error with the tail than without one-- but the portly plumber's foes are seen equipped with tails of their own such as Goombas, Boos, Bullet Bills, Thwomps, among others. And they are not afraid to use them either! Apart from the Tanooki suit, Mario can utilize the returning fire flower to scorch the hind parts of any opposition that gets in his way as well as try out the new Boomerang suit that launches one boomerang at a time. This is a terrific way to give those dastardly Boomerang Bros. a taste of their own medicine. Players can store a second power-up via the touch screen, and access it at any time by tapping the bottom icon. As with past Mario games, if Mario is to take damage while powered up, he'll revert back to Super Mario. If he gets hurt then, he'll turn into Small Mario, and if he is nudged by a baddie, he'll lose a life.

Thankfully, levels are built in such a way that they fit portable gaming sessions. The longest level takes about five minutes to complete. A checkpoint in the middle of each stage gives players a breather in case they mess up. Returning from games like Super Mario Galaxy 2, New Super Mario Bros. Wii, and Donkey Kong Country Returns comes the concept of the Super Guide. When a player loses five lives in a given level, an item box appears containing a special Tanooki leaf. This grants the player all the powers of the regular Tanooki suit plus invincibility. Falling into bottomless pits is still a danger, however. If the player loses five more lives, a P-wing surfaces, granting its user the ability to warp directly to the end of the stage with the only penalty being that they cannot earn glittering stars on their save file. These optional and in no way mandatory trinkets allow players of all skill ranges to go through Super Mario 3D Land without too much frustration.

Though if one does decide to skip a level, they will pass up precious star medals. There are three hidden or placed in precarious locations throughout a level. These can be slightly off-screen, resting in a hazardous zone, or inside a secret pipe's bonus room. These bonus rooms taunt players who do not use the 3D depth slider as they are set up in such a way where the camera angle shows an optical illusion to those that don't view the room in full 3D. There are approximately 300 star medals to collect, and perfectionists will want to gather them all as there is a plus to getting them all. Not only that, but some levels won't even be available to players unless they have a set number of medals. Occasionally, one will come across mystery boxes on the world map. These are ten or so second challenges where the goal is to clear the room of all enemies and nab the medal before time expires. Additionally, players can exchange boxes via StreetPass functionality. Most will have no use for this feature, but it is nice that it is there for those that can utilize it. 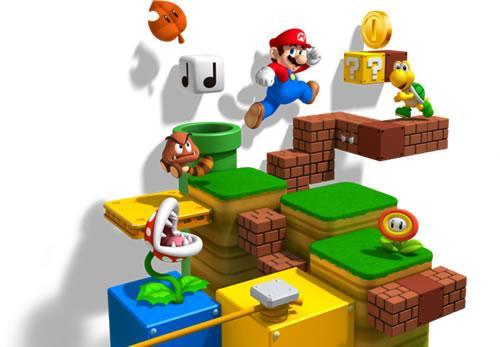 Super Mario 3D Land is not a long game initially. It should take most players anywhere between 3-5 hours to complete. However, the post-game content stretches the game out exponentially in hours, and it never feels like artificial padding. After the main game is finished, a whole new set of special worlds is unlocked. These levels are either variations of levels from the original eight worlds or new configurations completely. Some have a strict time limit where Mario has to collect clocks to add time to the counter while others have an auto-scrolling screen that moves twice as fast as normal. Another level features Cosmic Mario from Super Mario Galaxy 2 who mimics Mario's moves masterfully, and if the player isn't budging, the phantom version of the plumber will hurt them. In addition to these new levels, there is a bonus for getting a gold flag on all levels (done by reaching the very top of every level's ending flagpole and receiving a 1up). Perhaps there is even an additional character to control who plays differently than Mario...

Originally I was worried when I read that the player had to hold a run button down. After playing 3D Land extensively over the past week or two, I understand the developer's decision in doing this. If Mario ran by holding the circle pad the entire way, the precision platforming involved in the game would be infinitely more difficult to accomplish. By holding down a button to dash, the player can fine-tune how fast he or she desires everyone's favorite plumber to run without accidentally falling off a platform. Aside from running, Mario has a plethora of tricks in his repertoire. He can crouch, charge up, and back-flip into the air, he can-- with some speed-- perform a long jump across large chasms, side-flip, ground pound, wall jump, and do so much more. For such a chunky fellow, Mario sure is limber. Another potential problem was that Mario moves in eight directions. Seeing as the camera is always in the perfect spot, one really doesn't notice this at all. My only true gripe is that half of the aforementioned maneuvers of Mario are completely optional, and most players won't even bother experimenting with them. Why should they? They aren't necessarily needed besides back-flip and the long jump to attain gold flags.

Super Mario 3D Land is a gorgeous game whether you play in full 3D with the depth slider up all the way or not. However, those with the slider jacked up will be able to judge distances much better than one those who do not. Moreover, effects like giant spiked pillars coming from the background and thrusting themselves towards the foreground cannot be put to words how cool it is to see them in full stereoscopic 3D. It's like they're about to puncture your screen. The graphics are sensational with tremendous special effects such as fire, raindrops bouncing off the floor of a castle's keep, and dandelions dispersing their pollen when Mario tramples them. It is little things like this that make Mario's latest adventure so eye-popping and wonderful. The score is full of memorable melodies. The main theme is appropriately catchy, and many past themes from past Mario games make appearances such as Teresa Waltz from Super Mario Galaxy and Super Mario Bros. 3's athletic theme. Nintendo spared no expense crafting an excellent package with Super Mario 3D Land.

Think of Super Mario 3D Land as a platforming playground-- something so playful that it makes you feel like a kid again while you play... or if you're a kid, it will still make you feel your age. That isn't to say that the gameplay is childish or immature. Far from it. Mario's newest run-and-jump shows that even characters twenty-five years and counting can dish out entertaining experiences that still feel fresh and enjoyable. Super Mario 3D Land is a near-perfect mix of 2D and 3D gameplay. Some levels one can explore in, some are strictly 2D, some hide their secrets off-screen as others challenge the player in more ways than one. If there was ever a reason to own a 3DS, Super Mario 3D Land is it. While by no means the perfect Mario game, it is the type of game that even the most cynical adult can have the child brought out in them.