Dr. Frank N Stein from Transylvania is a “new neighbor" and we are introduced to this character within the initial live action sequence. We are also introduced to the Doctor’s very sensitive monster creation.

The Cartoon portion Begins: “Rolling Down the River”

An animated riparian area is shown and captain Koopa reigns over a boat with Princess Toadstool held captive. The brothers are seeking to rescue the lady and Koopa knows that is the case (that is ALWAYS THE CASE). Mario and Luigi gamble with some resident baddies while Toad poses as a Frenchman delivering a pastry. Toad is discovered by Koopa and thrown in the cell with the Princess. Mario and Luigi continue gambling and Mario’s appetite gets him into trouble when he steals a piece of chicken and drops some cards within his sleeves. When the brothers run to escape we learn the, “when in doubt, jump” rule. The brothers jump into dangerous water until they are fished from the river by a man, Mark Twain, who was in a race with Koopa to be King of the river. 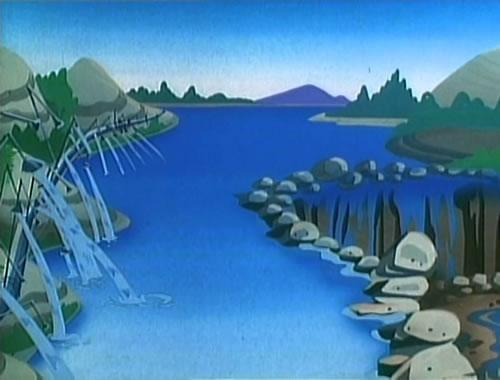 The river, before anyone rolled down it.

Mario fixes an engine and the brothers hope to rescue their friends. Black pit bob-ombs are thrown into the river creating a sink hole situation within the pathway. The mouth of the river is visited and exists within a small shack. She says the river can go around the hole if the plumbers can create it so. They redirect the water with an elaborate plumbing scene. The mouth of the river gives the brothers a necklace apiece and they are turned into super versions of themselves. Because they assist the boat in quicker transporting by jumping upon the paddle wheel, they catch up to Koopa. He strips the necklaces off the brothers when they arrive within his boat. Mark returns with the mouth of the river to defeat Koopa, and wins the contest. Finally, a victory dinner of catfish pizza is served and Mario is… not hungry!? Interesting, Mario does not apparently like culturally blended food?

Back to the non animated brothers and their neighbor the Dr…. Luigi goes shopping while the Doctor accompanies to find a normal brain. Luigi reassures him there is no such thing within the area. Mario and the monster switch brains momentarily and the show ends after the brothers profess their love to one another. This episode marks the zany brother’s first of five episodes to not feature a guest star of notable acclaim.