Daisy if often seen wearing colours like yellow, orange and green; her image, abilities and personality often represents flowers, hence the name Princess "Daisy". Daisy is portrayed wearing a floor length yellow and orange dress with wrist-length gloves. Daisy's dress has puffy sleeves with white floral frills peering out the openings. Daisy's collar is also a white floral frill, as well are the openings of her gloves.

In most of the recent Mario sports instalments for the Gamecube, Wii, and DS systems, Daisy's "primary sports outfit" includes orange shorts, a yellow sleeveless shirt, and the usual flower accessories. In Mario Smash Football, Daisy wears a two-piece soccer outfit. The outfit consists of an orange midriff-baring crop top with turquoise as a secondary colour and white. In Mario and Sonic at the Olympic Winter Games Daisy wears a winter outfit that is exclusive to all of the game's events. The contents include white skate boots with yellow lacing, white winter gloves, and the usual flower jewellery including crown. 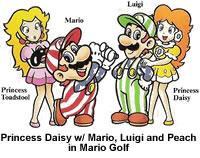 He hypnotizes her people and turns them into his army, and he kidnaps their leader Princess Daisy. Mario attempts to rescue her and save the people of Sarasaland who are an army ready to attack him!

Daisy has no particular enemies of note at present, though Tatanga the Mysterious spaceman has been known to terrorise her kingdom of Sarasaland from time to time he was exiled long ago by the Mario Brothers.

Princess Daisy's debut was in Super Mario Land in 1989 and she has appeared in over 30 games since. Years after her initial appearance Daisy started appearing in more games due to the lack of human species.