Overall, the game keeps the same popular aspect of the platforming genre that we can see in all Mario games, but it also includes numerous puzzles that need to be solved in order to proceed. Sometimes you will have to help Mario find keys scattered all over the game world, rescue mini Mario's and find bosses.

Mario vs. Donkey Kong places you into the shoes of Mario who is trying to reach Donkey Kong. The latter has stolen numerous Mini-Mario toys and Mario is set to bring Donkey Kong down and save the toys. There are numerous twists and turns in the overall game story, and the game explains that pretty well thanks to the numerous cutscenes that are added between levels. 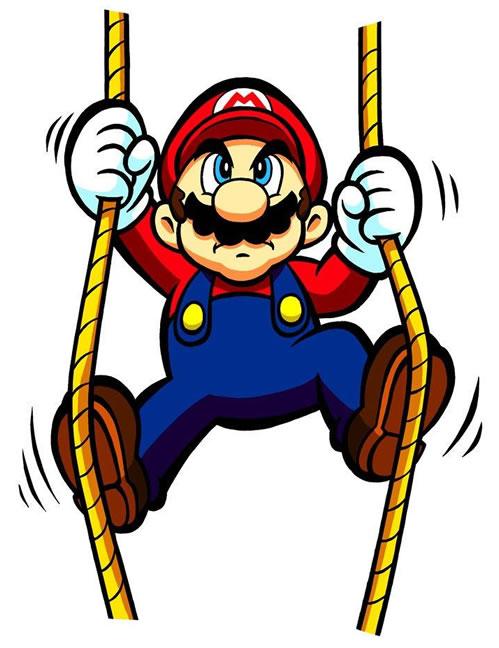 Mario pursues Donkey Kong up his many platforms, with grim determination.

The puzzle elements in Mario vs. Donkey Kong are cleverly designed as they always tend to test your agility. The most popular puzzle type is the locked door puzzle where Mario needs to find a key in order to open these doors. These usually contain toys stolen by Donkey Kong. Another puzzle comes into the form of guiding the Mario toys to a box located further in the level, while trying to protect them from harm. Then you also get the Plus level where you need to find a mini-Mario that holds the key to the end of the level. Of course, you also get an expert type of level which is similar to the first one, but the overall difficulty of the game is ramped up tremendously.

The main objective of the level is to get the Mini-Marios, but you will also have to interact with the game world through switches and other options, something that brings a lot of life into the game.

One of the major differences when compared to other titles in the series is that when hit, Mario loses a life when he takes even a single hit, so the game overall is quite challenging. He can also lose a life from a long jump or when he gets squished.

In order to ramp up the gameplay, Mario vs. Donkey Kong comes with a time limit for each level, which definitely makes the whole experience a lot more alert. When you are running out of time, you get an alarm message that entices you to push further and finish the game in the designated time limit.

Unlike previous Mario games though, you get the opportunity to perform backflips and handstands which enhance the gameplay quite a lot.

When Mario completes enough presents, he can actually enter a mini-game where he can earn extra lives. The mini-games are quite interesting, and most of the time they will test your skill in controlling Mario.

The controls are simple, you press A to jump, B to pick up item, the arrow keys to move Mario, the L/R to select the worlds and the Start button to pause or continue the game at your own pace. The in-game moves you can perform with Mario are Jump(A), Handstand (Down+A), Handstand jump (A while performing a handstand), Backflip (Left+A) and many others.

It looks like Donkey Kong is up to his old tricks again!

Over in the Mushroom Kingdom, Mario has become so famous that he's started his own toy company. His new Mini-Mario action figures are all the rage, and this cute li'l wind-up toy is just flying off the shelves. In fact, these toys are so popular that stores can't even keep them in stock. Donkey Kong just loves these new toys, but when he showed up at the store, they were all gone!

Donkey Kong's not famous for his patience, and he wasn't about to wait for the next shipment, so he just went straight to the factory and started grabbing all the new mini Mario's for himself. Mario arrived just in time to see Donkey Kong run off with all his inventory. Now it's up to you to help Mario recover his stolen trinkets and give Donkey Kong a good talking-to for not pre-ordering. 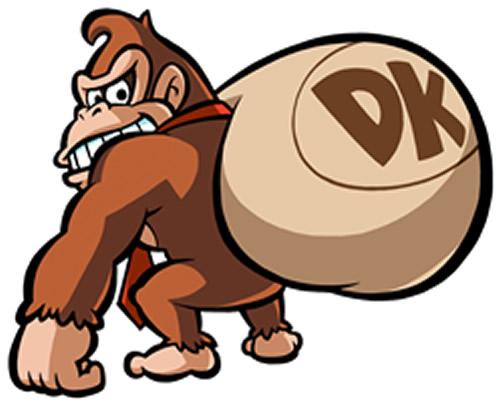 Donkey Kong stealing all the Mini Mario toys. What a cheeky monkey.

There are multiple game worlds that you can play, and each one has around 8 levels, with the last one being the boss battle.

The first game world is called the Mario Toy Company in which you can find mini shy guys, trash cans and other interesting items. After that you get into the Donkey Kong Jungle where you will navigate through ramrams, venus fire traps and ropes. Then you get to the Fire Mountain, which is a very interesting game world since it features volcanoes, lava, podoboos and fiery nitpickers. The following levels are the Spooky House, Mystic Forest and Twilight City. Each one of them comes with its own range of unique enemies, and the latter even brings a massive final battle against Donkey Kong. Most levels also have a Plus version which is harder to complete.

There are multiple items that can be found in the game as you play. Keys are used to unlock doors and are a very important part of the gameplay, and so are the Mini Marios, which are the objectives.

The 1-up mushrooms will give you an extra life and these are very important, although hard to find. Then you also get switches, conveyor belts, donut lifts, trash cans, elevators, hammers, presents, toy boxes and letters. All of these play an interesting role in the way the game is played, and all of them will help Mario get through certain obstacles present in the game world. The toy boxes in particular are located in the Mini Mario levels and they contain the letters TOY that you can collect as you play. Here is a full item list including a bit of info about each one.

Each enemy type can be found in a certainly level. The enemies you will encounter in Mario vs. Donkey Kongare the bats, brick monsters, boo, bob-omb, the black shy guy, the blowtorch guy, candle, cannon and cannonball, falling spike, fire, mini ninji, mini shy guy, monchee, nitpicker, oil, podoboo, polterguy, RamRam, shovalot, sleeping spear guy, snapjaw, thwomp blocks and the venus fire traps. Of course, the main enemy in the game still remains Donkey Kong and you will fight him multiple times during the game, each time in a different manner. Heres a little bit more info on them all.

Mario vs. Donkey Kong had a great reception as most critics praised it for being a great Mario tribute with lots of new items to keep the recipe interesting. They also liked the inclusion of Donkey Kong as well as the large number of levels that bring new challenges to the handheld platform it was released on. The game has a Metacritic average of 81/100 and around 79% on GameRankings. 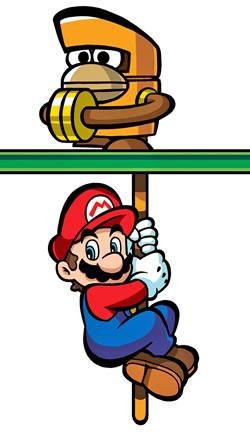