Mario is the main hero of the Mario series of games, and is usually the first character that comes to mind when people think of Nintendo.

But Mario isn't alone in his fight to defend the Mushroom World from a constant barrage of Koopa capers, he is often accompanied by his brother Luigi, and new found Dinosaur pal Yoshi. Despite all this fame and admiration though Mario hasn't forgotten his comparatively humble roots as a plumber and still sports the same attire he always did including a red cap with an M (for Mario) on it, white gloves, blue overalls and a red top underneath - this was his uniform when he ran his plumbing outfit with Luigi in Brooklyn called Mario Bros. Plumbing.

But it's not all defensive duty for Mario, he has endless talents that have helped The Mushroom Kingdom, for a few short periods he was even a Doctor. When the enemies of the Mushroom Kingdom are subdued Mario likes to get involved in all of the Mushroom Worlds sporting competitions and is a formidable player in most sports such as kart racing, tennis, soccer and golf. Mario's day isn't over when the sun goes down either, that's when all the fun begins as the Mushroom Kingdom has become rather renound for it's wild parties, which are sometimes even crashed by Bowser, Wario and various other undesirables who most probably didn't have an invite.

When Shigeru Miyamoto first 'invented' Mario as a solution to Nintendo being unable to release a Popeye based game he was actually called Jump man, click here if you want to find out more about Mario's Evolution.

Mario has starred in almost every game in the Mario series as well as three cartoons series, various TV adverts including McDonalds, milk for schools and lots of general Nintendo ads - he was also in a feature film called Super Mario Bros. The Movie in which he was portrayed by Bob Hoskins. Mario is without doubt the most popular and famous
videogame character of his time.

A video from the writers of the Adventures of Super Mario Bros. 3 showing the way Mario is meant to be portrayed as a character and the concept behind him.

A short bio of Mario from the Adventures of Super Mario Bros. 3 writers bible is as below:-
"Don't let Mario's looks fool you. He may be the shortest, chubbiest, most comedic-looking superhero ever to have his own show, but he always finds an ingenious way to overcome the most overwhelming obstacles in his path, and somehow, save the day. Even if it takes turning into a flying raccoon with superpowers, the irrepressible Mario will cleverly and bravely do his best to outwit the villainous Koopa Clan.

He continues the quest when wiser heads would quit. With the spirit of a true plumber, he will show up at any hour of the day or night, to solve a crisis that ordinary men refuse to even touch. No matter how many times he's tricked, trapped, or defeated, Mario bounces back. His greatest strength is his unconquerable spirit and his willingness to fling himself selflessly into any situation if justice is at stake."

A short outtake from the tattle information in Paper Mario about Mario:-
"It's Mario, silly! He's here to save Princess Peach, who was kidnapped by Bowser. Remember? He fights until the bitter end, no matter what enemies attack!" -Lee or a Duplighost, when copying Goombario's Tattle ability.

A short bio of Mario from Mario & Sonic at the Olympic Winter games is as below:-
This persistent little plumber developed his skills chasing down a big ape. Now he's taking his All-Around skills to the Olympic Games, where his running and jumping experience should come in more than handy in events like the high jump and hurdles.

Mario has been involved in a lot of adventures, so isn't short of things to say - check out a some of his quotes below

From the Videogame series.

From The Adventures of Super Mario Bros. 3 cartoon.

From the Adventures of Super Mario World cartoon. 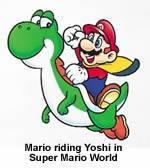 As you can imagine, with the entire series being named after him, seeing Mario in all the games, cartoons and the feature film as well as many other appearances like comics and TV commercials is a common occurrence. Mario has featured in almost every game since the beginning of the series in much the same way as the main hero. From classic adventure games where he has the main role of rescuing the princess, to riding on Yoshi and shooting baddies with the Nintendo scope, to playing sports or partying you can rest assured that Mario is never far away. He has also made cameo appearances in other titles such as the Donkey Kong series, Tetris, Zelda and many others.