If you hunt around YouTube, you will inevitably come across plenty of “competitive” action for Mario games, with users posting clips of themselves finishing levels in world record times and so on. But these clips are usually posted by fanzines or amateur devotees to the games; fun to watch, but not intended to be taken seriously. The videos will often have plenty of hits, tens of thousands, but the following is nevertheless a world away from the following of professional gamers in the world of eSports, an industry with millions of devotees around the world and whose revenue is now measured in billions of dollars.

For those not aware, eSports is an umbrella term for professional video games competition. Its top players are celebrated within the industry with a similar exuberance – and pay deals – to regular sports stars. Mainstream media attention has been growing over the last few years, but it’s not as if eSports tournaments need to be broadcast on ESPN or Sky Sports; the eSports industry is thriving within the confines of its natural online home.

The question, however, is whether a games franchise like Mario could ever make a foray into the world of eSports? Could Nintendo grab a slice of the hefty financial pie available with competitive eSports? Could super fans of the games, perhaps even readers of this site, turn their passions into a profession? The answer is probably more complicated than you might think.

First of all, there is a specific flavour to eSports games. In the cases of almost all the top eSports competitions – League of Legends, Dota 2, CS:GO, Overwatch etc – there is an epic quality to the games, with most of themes revolving around quests, strategies, shooting or fighting (multiplayer online battle arena games). Indeed, almost all eSports will require teams of players, all of whom will have defined roles and specific skill sets. In short, the games are more like Quake (the first game to evolve into an eSport) than any Mario release.

Aside from the themes, intense competitivity seems to be the key to making the step from video game to bona fide eSports stalwart. The fans, and there can be millions watching online, will support, engage and follow big teams like regular sports. Skill is, of course, appreciated, so that’s part of the reason why the phenomenally popular game Fortnite, which has had $100,000,000 ploughed into it for eSports, is struggling to catch the imagination as a competitive game, with critics pointing to the “random” and “lucky” elements of Fortnite scuppering the chances of skilled players.

Moreover, that competitivity has filtered through to other ‘supporting’ industries of the games. For example, eSports betting has become hugely popular, with sites like Betway launching a dedicated eSports section on their site. Typical outright markets you can find when you bet on eSports at Betway include: Invictus Gaming (9/10) and Fnac (7/4) to win the League of Legends World Championship, or South Korea (2/5) and United States (11/4) to win the Overwatch World Cup. All straightforward in betting terms, but there also markets within each individual match, such as handicap betting and correct score. It’s hard to see how that would translate to competitive play in Mario games competitions.

While all of this seems to suggest that the world of Mario and Luigi are not suitable for eSports, there is still some suggestion that it is about to happen – with Mario Kart. In fact, Mario Kart 8 has been knocking on the door of eSports for a while now, although it is not yet anywhere near the level of the games mentioned previously. In August 2016, Mario Kart 8: Ultimate Challenge was hosted in Adelaide Australia, marking Mario’s first ever high-profile eSports tournament. While the event went largely unnoticed and, indeed, the criticism is often levelled that the game is not a ‘true’ eSport, it still demonstrated that there are some working to make Mario eSports a reality.

There are some amendments that probably have to be made to the game, most notably to get rid of any elements of luck that non-competitive players would not notice yet might become apparent in professional competition. But those that would like to see Mario Kart should take heart from the fact that not all eSports are based on strategizing around legendary wars and killing your opponent with mythical swords. Some eSports, such as Rocket League, a soccer-style game played with cars, are just as casual and fun as anything in the Mario franchise. 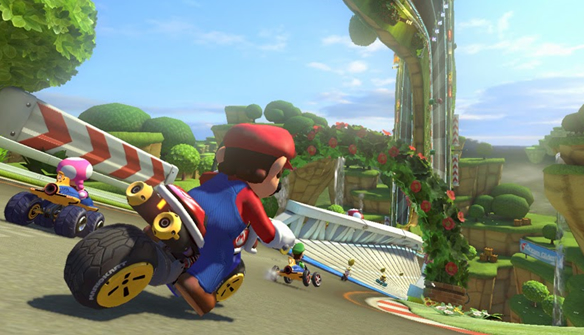 Will any Mario game be sitting alongside Dota 2 and Hearthstone as a competitive eSports game one day? Possibly not. But, we must remember that the Mario franchise has reinvented itself several times over the past three decades. Who knows what will happen if there is a strong will to bring Mario into the competitive arena of eSports?