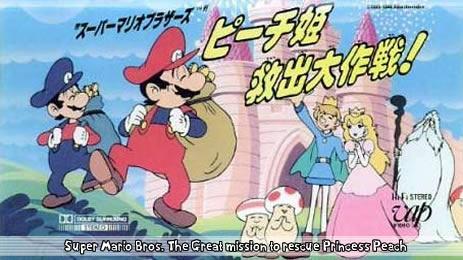 
Want to watch the classic Japanese anime production from 1986 online - you've come to the right place. The hour long feature has been broken down into six parts.

If you want to learn more about Super Mario Bros.: Peach-hime Kyushutsu Dai Sakusen online check out our guide which includes cast and production information, bloopers and the story.

Super Mario Bros.: Peach-hime Kyushutsu Dai Sakusen roughly translates to Super Mario Bros: The Great Mission to Rescue Princess Peach which is what it is known as in English speaking regions.

Now not broken down into 6 parts but into one nicely English dubbed higher quality version than we had previously. Credit to magiblot1 for bringing this to my attention (he also edited/added to the subs).

If you enjoy this video please consider subscribing to our YouTube channel which is updated frequently with Mario cartoon extras including unaired episodes and live action sketches, retro Mario TV Commercials, walkthroughs of the latest games (as well as covering the oldest and most obscure stuff like Mario on the Atari, Coleco and Satellaview etc!)