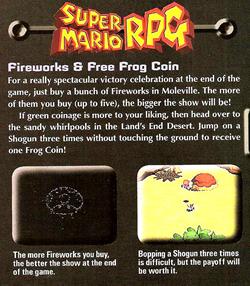 To get a glimpse of Mario as he used to be, step behind the curtained area in Booster's Tower. To compare adventuring notes with Link from the Zelda game series, spend a night at the Rose Town Inn.

Easy Flower Points
On Booster Hill as you chase Booster to the top, if you touch the princess she will give you a flower point. After you reach the top of Booster Hill to Wedding Moor, return to Booster Hill and Toad will approach you about it. If you run up the hill you can retrieve flowers on your trek back up the hill. Continue doing this until Toad prompts you, telling you there is no more flowers on the hill.

Fight Culex from Final Fantasy
If you want to fight the hardest boss in the game, Culex, first buy a firework from Molevile and trade it for a shiny stone at the pur-tend store (near the house where you get the fireworks) Go to Monstro Town and stand in front of the door that has a seal on it. Use the Shiny stone. Then go inside to fight Culex.

Get the Star Egg
To get the Star Egg you have to beat Grate Guy in Grate Guy's Casino 100 times. You don't need to do it in a row. If you leave the casino, you have to start all over again. The star egg is a weapon that you can use all the time. It does 100 damage to all enemies.

Get the Ghost Pendant
When you have talked to the Three Musty Fears, they will ask you to get their flags. Here's how: First go to Mario's Pad and look under his bed.

#1. Next, go to Yo'sters Island (you may have to go through the Pipe Vault) and look between the O and the A of GOAL.

#2. Finally go to the Seaside Town and look behind the welcome sign.

#3. After you do that go and sleep in the bed at Monstro Town. The Three Musty Fears will say something to Mario and when you wake up you will have the Ghost Pendant.

Get the Lazy Shell
To get the lazy shell you have to get the seed and fertilizer. You get the seed after defeating Smilax. To get the fertilizer you have to beat Valentina, go to the right side of Nimbus Land and press and hold up and forward at the same time. You should start walking on air. Talk to Shy Away and he will give you the fertilizer. Go to the geezer in Rose town (just walk straight) Give him the fertilizer and the seed. He will grow a beanstalk. Climb it. It will lead you to the Lazy Shell. One will be Mario's best weapon and the other is the best armour for defence.

Hero Shirt (Mario's best armour)
When you get to Mostoro town talk to the wolf and he'll ask you to jump 30 times (in a battle with super jump). It takes a while but when you do he'll ask you to do 100. If you can he will reward you with a "hero shirt."

Reset the Game Without Getting up
Anytime during the game hold L,R and push select+start together.

To get to the great guy casino
First you have to beat the knife guy&great guy in boosters castle , then when you get princess in your party go back to boosters castle and on one of the floors will be the knife guy play his game and win about ten times in a row and he will give you a bright card. then continue until you get to a place called bean valley defeat the boss and go back to were the tunnels with piranha plants sticking out of them wait until the shy away waters the plant nearest to the saving point defeat it and go down the tunnel there will be a golden chomp beat it jump three times right of the chomp a platform will appear when you jump on it go out the exit go left on the map go in the house and your there.

Troopa Pin and Unlimited Frog Coins
Go to Land's End. Climb up the cliff. Do it as quick as you can. If it is under 11:00 seconds you get the Troopa Pin. Fall off then climb up again under 11:00 sec to get five Frog Coins. Repeat falling and climbing to all the Frog Coins you want. *.* REMEMBER*.* Always practice to get better so you get coins faster. Like the regular coins you can only have 999.

If you know about any cheats we don't have, or you have some tips not listed below please let us know and we will add them, crediting the submitter.