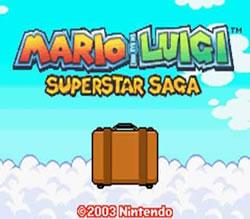 Introduction
On March 8, 1996, Nintendo released a game called Super Mario RPG. This game was like no other. It had tons of new things to do. This wasn't the same kind of game fans were used to playing. Seeing Mario in a RPG stirred up people's imagination. Five years later, Paper Mario came out on the N64. Fans were slightly disappointed that the game didn't live up to the original's expectations.

Just two years after that a new RPG staring Mario was introduced, but to everybody's surprise, Luigi was now a playable character! Even with Luigi, fans were skeptical. Does this new RPG really live up to expectations, or are the fans setting their hopes too high? Well, it's time to find out.

Story: 9/10
The story, although seemingly pointless at first, is really humorous. Normally, you'd expect Princess Toadstool (Peach) to be kidnapped by Bowser, but that's all in the past! This time around, she has her voice stolen. In replacement is her new vocabulary, which adds a little ''boom'' into her arguments. Now it is up to Mario to get back the princess's voice. Normally, he would do it alone, but this time he has help: Luigi. The ''lone green guy'' is now helping out Mario on his quest to recover Peach's stolen voice. Will they succeed? They will need a new roster of moves to thwart whatever plans the stealer has.

Gameplay: 10/10
This is the most remarkable playing style I have ever encountered. You get to play with not just one character, but you have to control two characters (Mario and Luigi) simultaneously. Along with that, you have several objectives before you reach the end, so you'll never become bored. The gameplay is designed for experts and children alike, because you can go at your own pace. Plus, there is plenty of humor to keep you laughing and moments of suspense that will keep you at the edge of your seat. The gameplay alone is enough to buy this game, but if you still need convincing, read on. 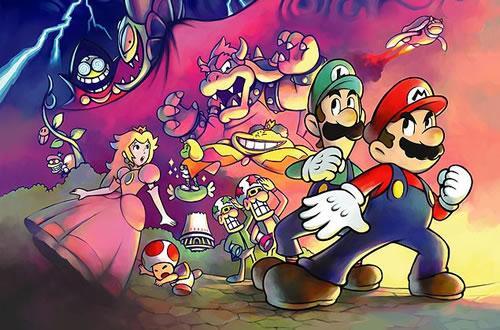 Graphics: 11/10
Oh man, this is where the game shines the most. The graphics are totally awesome and breath-taking. You could be so engulfed in the graphics that you might miss a week of school and not even know it! The most noticeable about the graphics are the battle animations and the characters. You can practically see every detail of Mario and Luigi in plain view. Also, the battle animations are well-done. Every attack you perform is perfectly done, with no slow down. What is that? Even after the explanation of the magnificent graphics, you still need confirmation that this is THE GAME to buy? Then read on, and brace yourself.

Sound: 12/10
Did I say that the game's highest point was the graphics? Well...I lied. The sound on this game is incredible. Compared to its previous titles, it is absolutely remarkable. This isn't like musical beeping; it has actual sound in it. It also has plenty of classics in it, all the way back from Mario 64 and even Super Mario Bros. What is most noticeable is the character's voices. Most of the time, you would see a text box to hold the words, but in some dialogues, the characters actually speak! The bottom line is that the game's sound is unmatched against any other GBA game.

Replay Value: 8/10
I'm not sure if you can say that this game has a good replay value. It will take you a prolonged amount of time to beat, which could keep you from restarting it again. It does have some extras, like mini-games and secrets, that could keep you playing, but unless you want to spend another couple of days beating the game, the replay value isn't all too great.To rent...or to buy...that is the question. 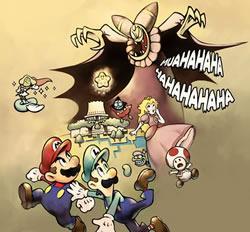 Hmm...do you really need any more convincing? This game has a well-done plot, excellent gameplay, awesome graphics, unmatched sound and a descent replay value. Not buying this game would be pure insanity, even if you aren't a Mario fan. Go buy this today, before all the copies are sold out!