“Alleyway” is a block breaker style game where the player controls a paddle (which is piloted by Mario) it was developed by Nintendo and released on the Gameboy. It premiered in Japan in 1989 and throughout the rest of the world in 1990. Later, it was given a rerelease on the Nintendo 3DS in 2011.

Alleyway on the Gameboy was named for the gateway that is used by the player and their spaceship. Although it is similar to the game “Breakout” in many respects, it has many different stages, levels, and bonus areas for the player to experience. On the original box there was a non-descript protagonist for the game, yet the later releases of the game showed Mario on the box art. Though it did not directly feature Mario, his numerous cameos in the game made the game notable for his appearances even though it was not well received by critics.
Gameplay

“Alleyway” on the Gameboy had a rather simple basic objective: destroy all of the bricks on each level using the paddle and ball while simultaneously preventing the ball from falling into the pit beneath the paddle. The player can adjust the speed of the paddle as it travels across the bottom of the screen by holding the B or A button. The paddle can only move horizontally across the screen, but not up and down which adds a dimension of difficulty to the game. Each time that the player loses a life or restarts, they are able to move the paddle to a different, advantageous position before the ball is released again. The player begins the game with five lives, or paddles, and loses one each time that the ball is allow to sink into the pit. 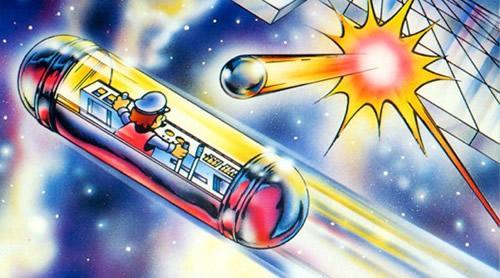 You are rewarded with a game over sign when you lose all five of your paddles. Fortunately, ever time that you gain 1000 points in the game you gain another paddle, up until a maximum of 10000 points. After that, you are on your own. Unfortunately, the original “Alleyway” game on Gameboy does not feature a way to save or continue any of the games that you have played. This means that you must restart the game each time that you turn it on, though it does save the high score for the game. On the Nintendo 3DS release, the game has been granted a single save spot. This lets you play the game at your own leisure, and pick up wherever you left off.

Originally released at the launch of the Game Boy, Alleyway is a fondly remembered update to the classic ‘bat and ball’ style of games.

The aim is simple: survive and rack up a huge high score! Take control of the paddle and deflect the ball to break the blocks, but don’t let it drop. Break all the blocks to move onto the next of 32 challenging stages.
It starts out simple but later levels introduce walls of blocks that move horizontally or vertically. You can also enjoy bonus stages where the aim is to break as many blocks as possible within the time limit.

How The Ball Acts

The ball in the game acts on certain principles. The ball can only travel at 15, 30, or 45 degree angles. Once the ball comes into contact with a brick, it bounces back at the same angle that it made contact with the brick. However, the ball’s speed depends on which brick it hits. If it hits a grey or black brick the ball will speed up. However, if it hits a white box or an indestructible box, then it has no effect.

Finally, the ball in “Alleyway” cannot be locked into an infinite loop that some games experience. The ball will eventually contact an indestructible block or it will experience a sudden speed change that will allow game play to resume unaffected.

The basic format of the game featured 24 separate levels, with eight different block patterns over three stages. After the player successfully navigates three levels, they are taken to a bonus stage, giving the game 32 total levels. Although many of the blocks lack design, there are some levels that have models built into them, such as one that featured Mario’s head. After all of the bricks are destroyed on a level, a new pattern emerges. The first stage features regular blocks that must be broken apart. The second stage has a scrolling block pattern which has bricks that move from left to right throughout the game play. The third pattern has bricks that will move downward one block length at a time, but will not impede the player’s playing area or help them garner more points. 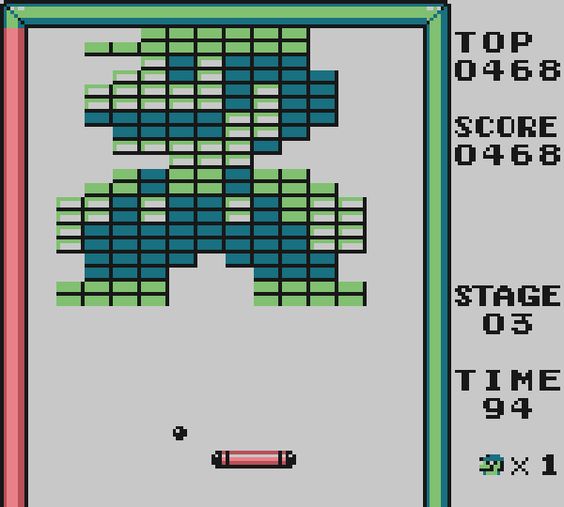 As the game continues, new elements are introduced to make the game more challenging. After you complete the fourth stage, the paddle size is reduced to half until the bricks are cleared or the player loses a life. On every third pattern stage beyond this point, there are extra bonus bricks that come down from the ceiling after the initial blocks have been completed. This means that the player must complete the same pattern twice in some cases. Following the 12th level, indestructible bricks are integrated throughout the stages.

There are many bonus stage patterns that are used throughout the game. Many of them feature familiar characters from the Mario series. Among these are Goombas, Bowser, and even Piranha Plants. These levels have background music but cannot be paused during the game play. These levels also have a timer that limits the amount of extra points that the player can score. If you manage to successfully navigate all of the bonus levels that are offered by the game, then you are rewarded with a congratulations screen that features Mario from his appearance in “Super Mario Bros” on Nintendo.

A list of Super Mario characters appearing in Alleyway and the bonus levels they appeared on:-

Mario pilots the spaceship-esque paddle, and with a heavy hand, and an even heavier heart, sets about at destroying a visage of himself.

Scoring In the Alleyway Gameboy Game

Every time that the player destroys a brick, they earn points, depending on the shade of the brick that is destroyed. One point is awarded for the lightest bricks, and three for the darkest. Each of the bonus levels also reward between 500 and 1,500 point depending on how far the individual got in the bonus levels. Although the game only shows the first four numbers of your score, the game has an overall maximum of 65,535 points. Any time that you get above 10,000 points, the score is shown as a combination of numbers and sprites. Some of the spites have even come from the Mario games. For example, the fire flower comes about after 10,000 points, there is a mushroom for 20,000 points, and a Starman is featured above 30,000 points. Since the Starman is the final level of sprite that can be achieved and the score is maximized at 39,999, the game will only register another 35,000 points.

The “Alleyway” Gameboy Game was one of the launch titles for the Gameboy when it was released in 1989, along with other titles such as “Tetris” and “Super Mario Land”. This is significant because “Alleyway” marks one of the first appearances by Mario on the Gameboy, as it was released alongside “Super Mario Land”. After the boxart was redesigned, it featured Mario instead of the unidentified character in the space suit.

The “Alleyway” Gameboy game was one of the first efforts by the Nintendo R&D 1 development team. The members of this team would later use many of the principles that they had developed with this game as a source for other games that would come out throughout the 1990s.

Although it experienced a fair amount of success as a launch game for the Gameboy, “Alleyway” for the Gameboy was met with a fair amount of criticism. Of course, the most prominent criticism that was levied against the game was that there was very little to break up the monotony of the game. While many reviewers praised the bonus levels and the introduction of some familiar faces from the Mario franchise, they expressed a desire for more power-ups to make the game less predictable. The overall sentiment was that the game had the potential to be better, but most players would quickly become bored with the game style.

However, there were a few review magazines that praised the game’s variety of levels that the game had, including the bonus stages. While they were glad that the game was able to save the top score, the need to beat the game in just a single sitting still kept “Alleyway” on the Gameboy from achieving its full potential. The overall consensus was that the game was inventive for its time, and was at least a good game to have on a long trip.

A gameplay showcase of Alleyway by Ben Castellanos.