Mario and his Mushroom Kingdom friends are back in this latest instalment of the famous side-scrolling platform adventure series. Mario's latest adventure is packed full of all the classic side-scrolling game play that all ages can enjoy. But what really makes it the gold standard in platforming fun is the true wealth of brand new features and gameplay elements.

Join Mario and Luigi as you play through over 80 levels, tackle new enemies and attempt to reach the ultimate goal, to collect 1 million coins. New Super Mario Bros. 2 promises to deliver a fun-filled adventure full of golden gameplay that all ages can enjoy, only on Nintendo 3DS and 3DS XL.

Story
Trouble always seems to find its way to the Mushroom Kingdom. Just as Mario and Luigi go off on a coin hunt in the sky, their beloved Princess Peach is kidnapped by the dastardly Koopalings. The brothers have to venture through over 80 stages to rescue her, grabbing an endless deluge of coins across land, water, air, and snow along the way.

The New Super Mario Bros. 2 game is bursting at the seams with an endless flow of gold coins for you to collect. You'll explore levels filled with gold pipes leading to coin-filled caverns, gold enemies leaving behind trails of coins, and new power-ups and items that will push your coin count into the stratosphere. Can you collect a million coins?

Shiny new Power Ups and Items
Use familiar items such as the Super Leaf, Mega Mushroom and Super Star to tackle obstacles in your way. However, new power-ups have appeared and each one gives you a boost to reach new heights, grab multitudes of coins, and more. 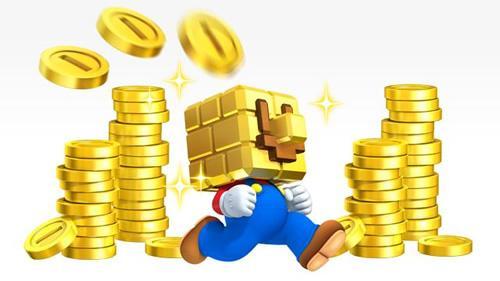 New online and multiplayer modes
Whether you're in a friendly or competitive mood, enjoy a romp through New Super Mario Bros. 2 with friends and family in a variety of fun modes.

Two Player Co-op
If you and a friend each have a Nintendo 3DS system and a copy of the game, you can play through the entire game together with a local wireless connection. Collect double the coins, team up for devastating double Ground Pounds, and more. A buddy can even join in to help when continuing from your Solo Play save file.

Coin Rush
Show off your super skills in this mode, where you'll play three levels back-to-back trying to earn as many coins as possible using only one life. Your Coin Rush record is then saved and can be shared with other players via the StreetPass feature. These players can try to beat your score, and you can challenge theirs.

Worldwide coin total
Enable SpotPass communication for New Super Mario Bros. 2, and every coin you collect will be added to the Worldwide Coin Total, along with other players like you. How high do you think it will go? Let's find out together!